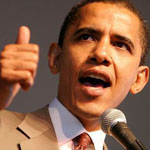 Researcher highlights how Obama has inspired mixed-race workers to achieve

March 2009: New research carried out at the University of Leicester suggests that Barack Obama has become a ”glorious mascot” for biethnic people seeking to achieve in the workplace.

The US president is seen to give inspiration and new impetus to biethnic people who seek to achieve ”against the odds.”

Postgraduate researcher Rana Sinha has studied if a biethnic background provides any advantage to a biethnic adult in adapting to the modern international workplace. The study has been carried out at the University of Leicester Centre for Labour Market Studies.

“My research at the University of Leicester aimed to discover if a biethnic background provides any advantage to a biethnic adult in adapting to the modern international workplace.

“Barack Obama, the eloquent president of the USA has now become a glorious mascot for biethnic people as highly successful and able individuals, who rise and succeed against many odds.”

What then are the odds biethnic adults face at the workplace? The findings of this research did not refute a commonly prevalent stereotype that biethnic children should identify with the parent of colour because society will ultimately view them from this perspective. President Barack Obama also identifies himself as black.

A second stereotype is the belief that biethnic children and adults avoid discussing their ethnic heritage. This proves to be untrue and any such reticence depends on the context and the motives of the person engaging in such discussions.

President Obama plays a very important role as a celebrity mascot in lessening the burden of the third stereotype, which portrays biethnic individuals as people who will be rejected by all ethnic/racial groups and considered to be marginal but not actual members of these groups does not hold either in a modern society.

Biethnic adults may even adapt to the workplace norms and behavioural requirements better. This is because they have acquired better tools through wider perspective and exposure to differing norms and behaviours in their own background. Biethnicity when combined with suitable personality traits, motivation and life experience could produce better adaptation. However, all the interviewees in this research were quick to point out that biethnicity by itself does not automatically make for better adaptation, but biethnicity is a possibility and not an automatic advantage.

The research focuses on Finland- which is very different from a melting pot society like the USA or multiethnic UK.

Rana said: “The research findings suggest that organisations should consider integrating norms and behavioural skills requirements into strategies for improving organisational socialization of employees in addition to task and process induction.”