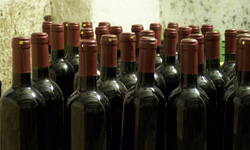 ROME/BRUSSELS, April 4 (Reuters) – Italy assured the European Commission on Friday that its wine was safe to drink after an investigation raised fears of another culinary health scare like the one that hit Italian mozzarella last week.

A prominent Italian magazine revealed police were investigating the cheap end of the market for tainting wine with harmful chemicals, like sulphuric and hydrochloric acid.

But a prosecutor investigating adulterated wine told Reuters that there was no evidence of dangerous chemicals involved, just water and sugar. Brussels confirmed it had received similar reassurances from Rome.

“The Italian authorities have informed us that their investigations have confirmed that this is purely a case of adulteration of wine and that there is no health risk,” Nina Papadoulaki, an EU Health Commission spokeswoman said.

“In fact the problem concerns the addition of water and (beet) sugar.”

L’Espresso magazine had quoted investigators as saying 70 million litres of the adulterated wine may have been put on the market, with price tags of between 70 cents and 1 euro (($1.10 to $1.57) a bottle. In some cases only one fifth of the ingredients in the tainted ‘wine’ would have been grapes, L’Espresso said.

Little more than a week after several countries banned Italian buffalo mozzarella due to fears it was tainted with dioxins from illegal waste burning near Naples, the wine investigations again pushed the government to defend traditional Italian goods.

STORM IN A WINEGLASS

“A few wrongdoers, who incidentally were already known to police for similar previous offences, certainly do not represent the image of the entire sector,” he told reporters at Italy’s main annual wine fair.

In a separate investigation at the luxury end, 600,000 bottles of vintage Brunello di Montalcino have been seized by investigators who suspect winemakers used grapes other than Sangiovese, the only ingredient allowed in the Tuscan wine, a favourite of U.S. connoisseurs, L’Espresso magazine reported.

The mixing of other grape varieties into Brunello, while posing no health risk, could dent its reputation in valuable export markets.

An official in the Brunello wine consortium told Reuters that based on court documents he had seen, the problem was related to the amount of grapes harvested per hectare.

Francesco Marone Cinzano, owner of producer Col d’Orcia, said a total of five Brunello producers were under investigation. Apart from Col d’Orcia, they include Frescobaldi, Villa Banfi, Argiano and Antinori, he said.

Italian wine took years to recover from a scandal in the 1980s when a handful of producers added methanol — a cheap alcohol used in anti-freeze and for fuel — to boost the bite of their wines, killing at least 20 people.